No To Shell Seismic Survey on the Wild Coast

The Eastern Cape Environmental Network has noted concerns after Shell announced that it will start a three-dimensional seismic survey in search of oil and gas deposits from Morgan Bay to Port St Johns starting on December 1. Shell has appointed Shearwater Geo Services to conduct the survey, which will last from four to five months and cover 6,011km² of the ocean surface. The survey area is located more than 20km from the coast, with its closest point in water depths ranging between 700m and 3km.

In an attempt to stop the survey, ECEN has encouraged its network affiliates to sign a petition which has been launched by the Oceans Not Oil coalition to the Environment, Forestry, and Fisheries Minister Barbara Creecy, calling for her to withdraw the approval of the application. The petition had close to 13,000 signatures on Tuesday 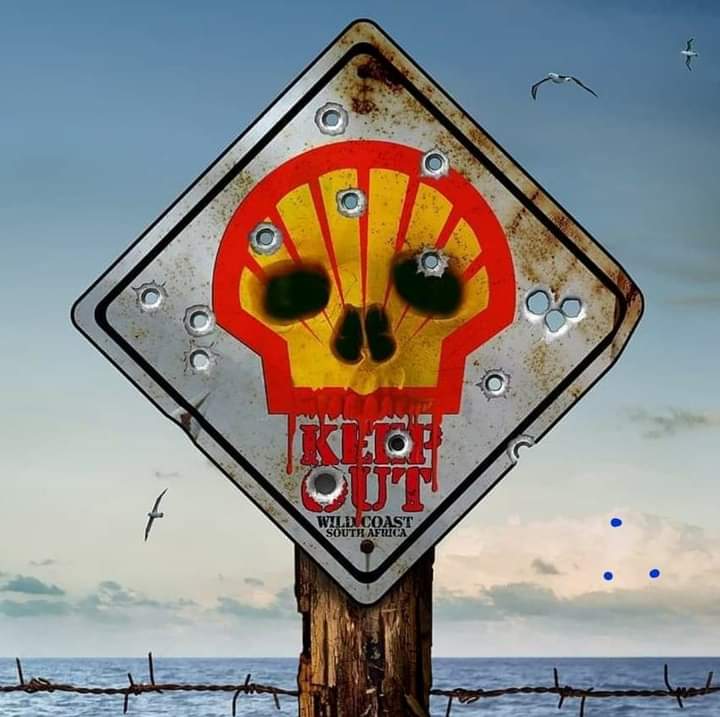 ECEN is concerned about the impact the survey will have on the ecosystem and the livelihoods of small-scale fishing communities in the area. As we have seen in other areas of the country and the world, these kinds of activities can be highly disruptive for the marine fauna, and change patterns of migration and movement of fish species. This leads to fishing communities not having the same access and reduced harvests.

Having been working with the fishing communities who have fought for decades to be recognized and to be granted fishing rights, only to see their natural resources being sold off in the name of extractive profit-making. This practice by SHELL will kill their businesses because you can’t open a mine where there is fishing. This so-called development it’s not people’s centered development, as this decision was taken without looking at the environmental effects of the seismic survey,

In Richards Bay, for instance, about 34 whales died when this same survey was done there. Our concern is that there are other species here like the crayfish and other species of fish that may be affected by this SHELL survey. ECEN will mobilize communities to oppose the survey. We are totally against the drilling of oil and gas in the ocean, by whoever.

East London museum scientist Kevin Cole said seismic surveys produce a continuous underwater noise (greater than 230 decibels using an array of airguns) day and night for months and this will have a negative impact on marine life evolved to rely on sound as a primary sense in the dark oceanic environment.

“Marine animals are highly sensitive to acoustic sound. Marine fish and mammals depend on sound for communicating with group members and young, food-finding, reproduction, avoiding predators and hazards, navigation and sensing their environment,” he said.

Cole said there is no baseline research on the effects seismic surveys will have on this particular marine environment, and seismic surveys in general have been known to have the following effects on marine life: 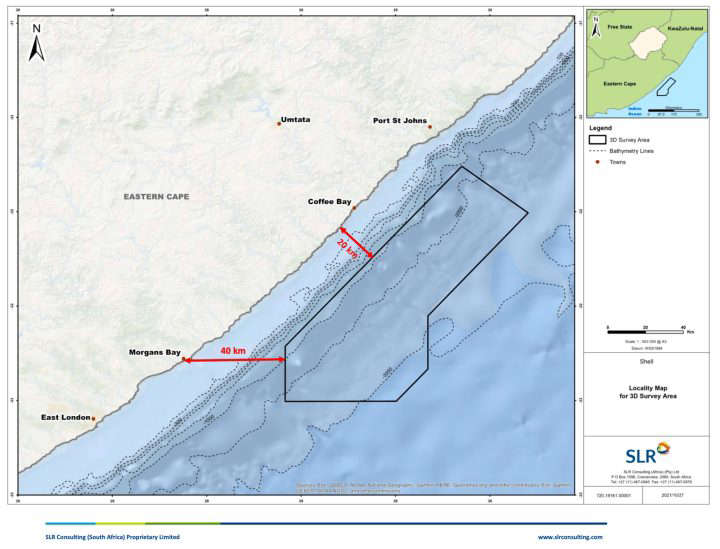 Cole said even though it is proposed that these surveys take place out of the migratory season (May to November) of the more notable larger species such as humpback and southern right whales, semi-migratory and other species, such as the deep-diving beaked whales, Bryde’s whales and sperm whales, will be in the area during the survey period (December to April).

“One of the beaked whales, called True’s, has never been seen alive at sea – they are known only from strandings in our area so we have no clear understanding of their distribution, abundance and behavior,” he said.

He said deep-diving beaked whales may surface too quickly and die from barotrauma as a result of seismic blasting.

“South Africa does not have an environmental management plan which considers an ecosystems approach to fisheries management (EAF). The EAF is being promoted by fisheries scientists in South Africa,” said Cole.

He said South Africa does not have a national guideline document related specifically to the undertaking of seismic surveys in SA waters.

The Marine Living Resources Act 1998 does not specifically refer to seismic considerations in the protection of marine mammals. It has been suggested that a Marine Mammal Plan be drafted to guide environmental management plans for potentially detrimental activities in the oceans, including seismic surveys.

“Research should be undertaken to determine areas [in the proposed survey range] that provide potential year-round critical habitats to endangered marine species, including key fish species. This will require the collation of baseline ecological data – considering an ecosystems approach to the whole area in question,” Cole said.

He said the synthesis of this information should be tabled before an exploration permit is considered.

“Stand-alone marine faunal assessments or fisheries assessments normally included as part of an environmental management plan for an exploration permit will not suffice as these are only assessments and do not consider the ecosystem as a whole,” added Cole.

He said that because many marine animals use sound as their primary tool to navigate, communicate and to orientate within the relatively dark environment of the sea, anthropogenic noise (such as seismic surveys) will negatively affect marine animals by interfering with important aspects of their lives such as foraging, schooling and migrating, mating (masking of mating calls) and disruption of homing or orientation.

“Acoustic pollution is on the increase in South Africa. The development of the oceans/blue economy is being bolstered by initiatives without adequate environmental checks and balances in place, which will have a severe impact on marine species and marine ecosystems. Marine acoustic pollution (including ships’ noise) is currently under-researched and unregulated in South Africa – this is of concern.”

Pam Ntaka, a spokesperson for Shell Downstream South Africa, said a full stakeholder’s consultation process was undertaken in 2013 as part of the development of the environmental management programme.

“The consultation process was aligned with the requirements of the Mineral and Petroleum Resources Development Act and environmental management programme guidelines as part of the National Environmental Management Act.

“A stakeholder database was compiled by an independent environmental practitioner, which included government authorities (local and regional), non-governmental organisations, community-based organisations and industry groups, including the fishing industry.”

Ntaka said adverts were placed in the media informing the broader public about the proposed exploration activities and inviting them to provide input into the environmental management programme process.

Ntaka said they had obtained environmental authorisation for the project in 2014. The environmental compliance audit was done by an independent specialist in 2020 and was approved by the government in July 2020.

Ntaka added that a significant amount of research had been conducted globally on seismic surveys and their impact on marine environment.

“The impacts are well understood and mitigated against when performing seismic surveys. This is supported by decades of scientific research and the establishment of international best practice guidelines.”

She said there is no indication that seismic surveys are linked to strandings.

“This can be verified through environmental specialists and the outcomes of autopsy results on stranded whales and dolphins along the coast of South Africa.”

“This, in combination with the mitigation measures outlined in the environmental management programme, ensures we are conducting seismic surveys safely with regard to marine animals and the environment.”

She said the mitigation measures include an exclusion zone of 500m around the sound source that is monitored 24 hours a day by independent marine mammal observers on board the seismic vessel.

Ntaka said if any animal enters the exclusion zone, operations are immediately shut down.

“A pre-watch must be conducted for at least 60 minutes to confirm there is no marine animal within the exclusion zone before operations can commence.”

The Department of Mineral Resources and Energy and the Department of Environment, Forestry and Fisheries did not respond to questions sent to them on Thursday last week. DM/OBP

As ECEN we have joined the campaign, on the 13th November we were at Nahoon, Reef support locals saying To Hell with SHELL 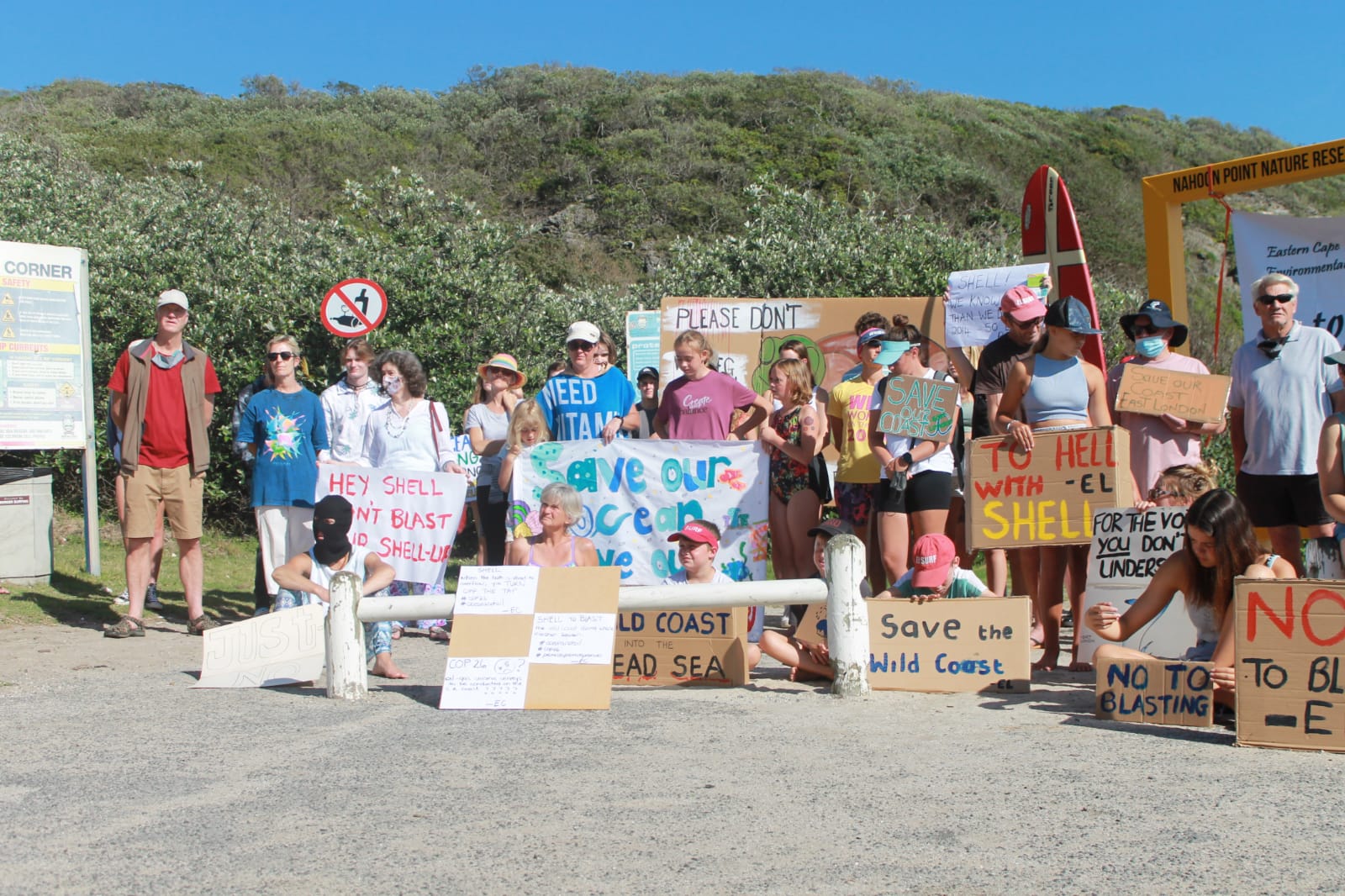 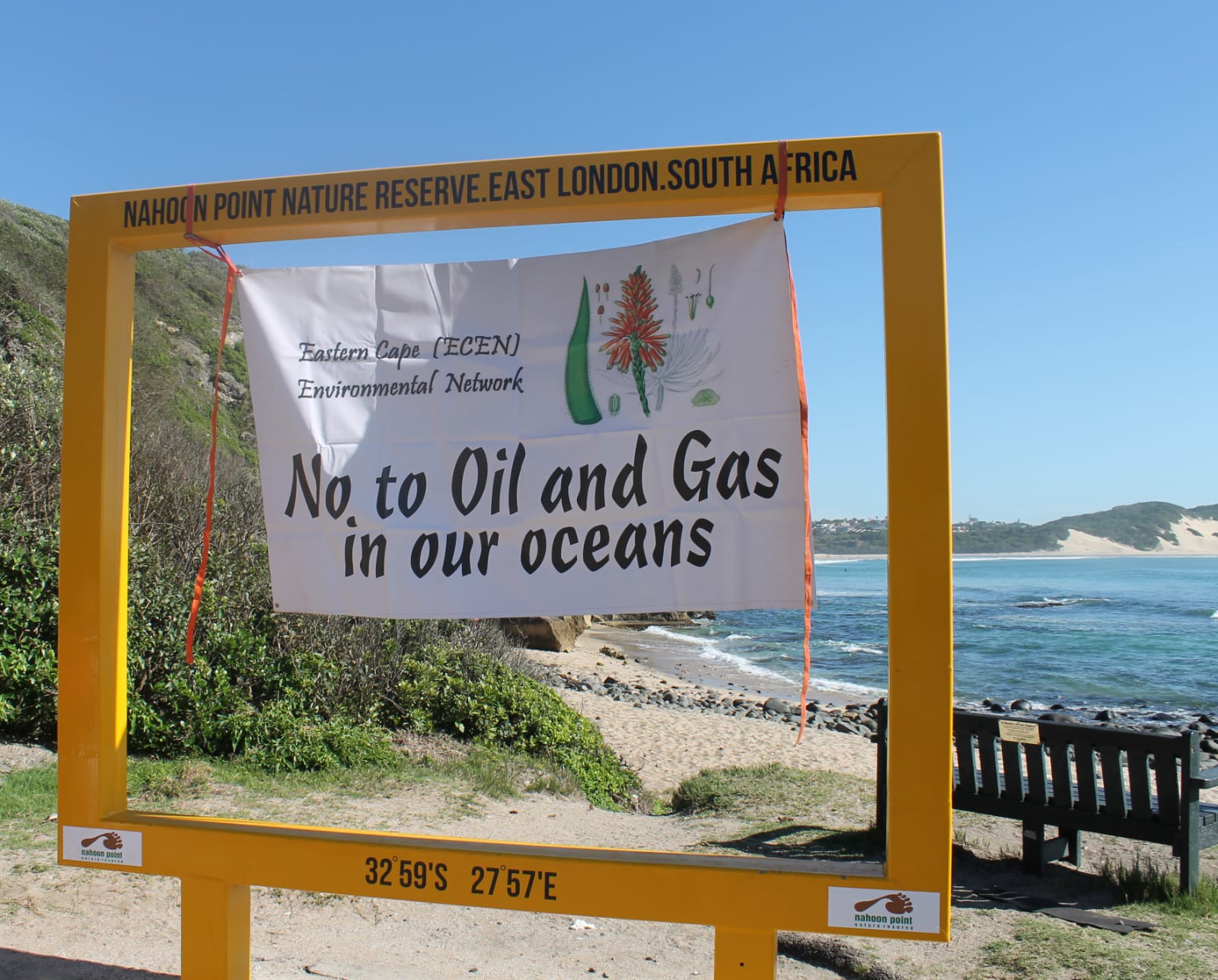 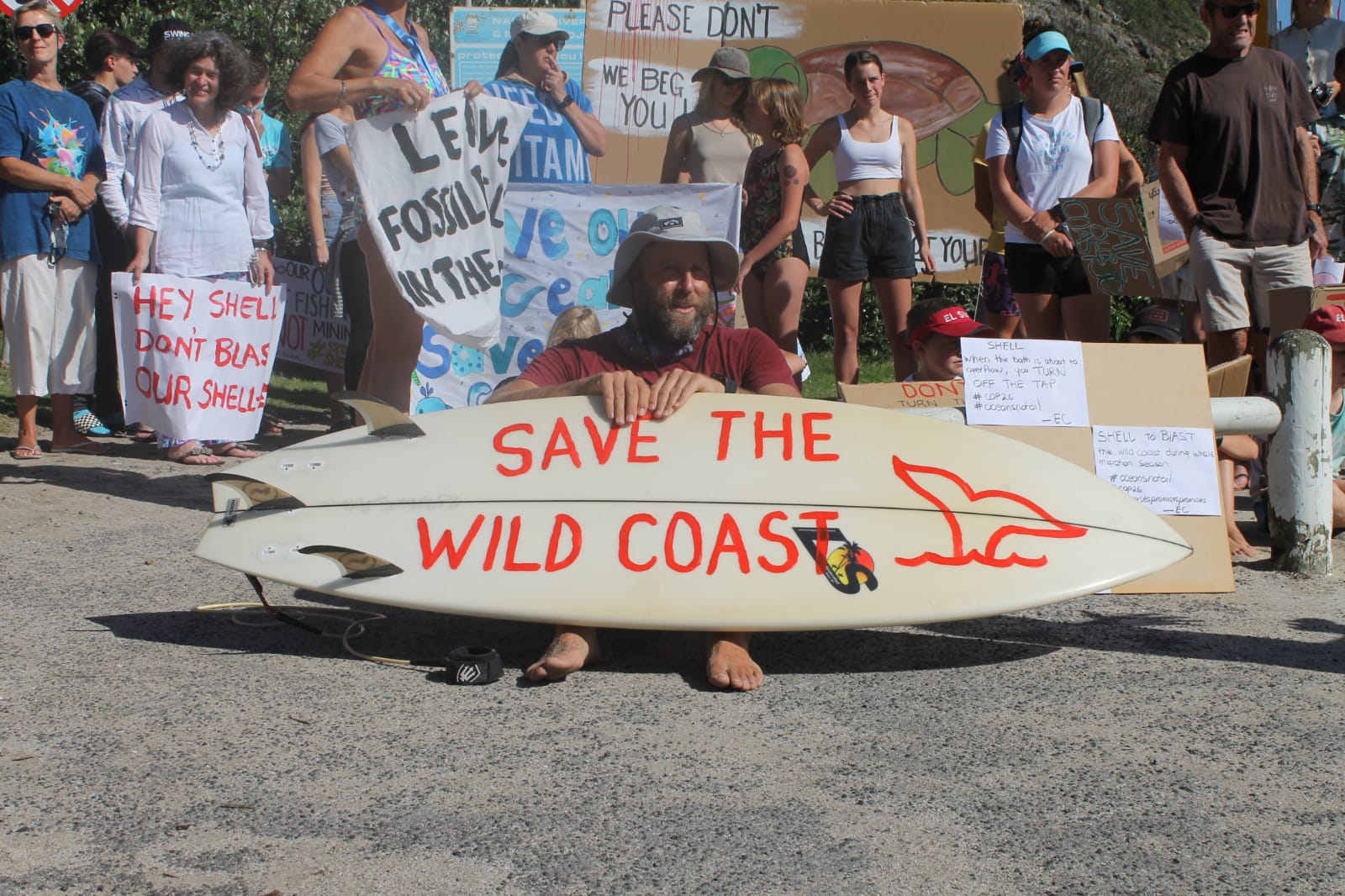 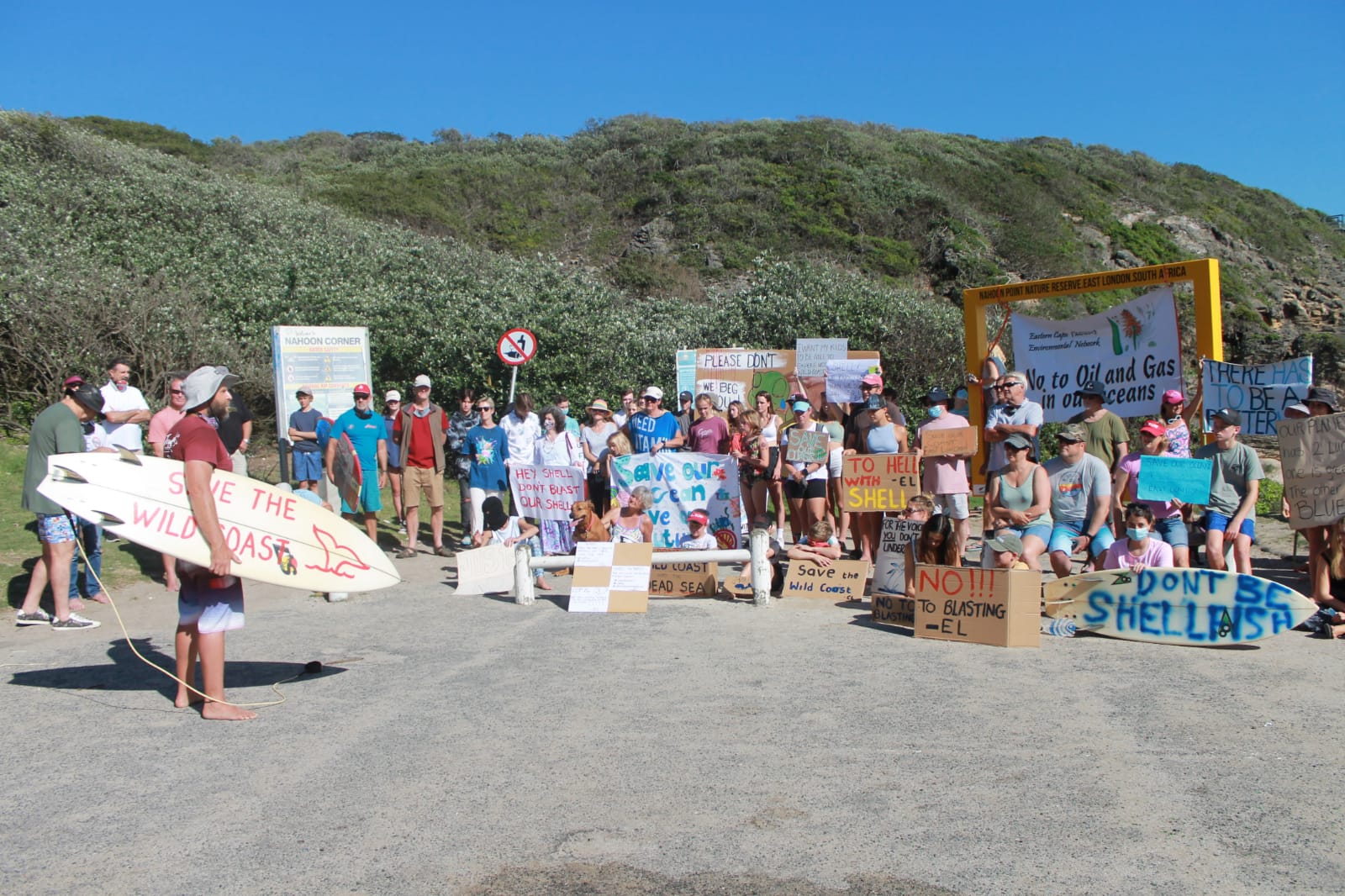